Higher-capacity, larger and more agile networks are needed to stay ahead of the oncoming tide of cloud-based services, Virtual Reality (VR), streaming video, gaming and other bandwidth intensive applications.  Furthermore, the optical community is working for developing open, disaggregated (in both horizontal and vertical directions), programmable and scalable ways to deploy network capacity efficiently between hyper-scale data centers within dynamic environments.  All these requirements lead to multiple, continuous technical developments and breakthroughs, with many of them unveiled just before or at the latest edition of OFC conference (21-23 March 2017 in Los Angeles).  This post includes a selection of the latest optical transport technology news relevant.  Please note that the pick is neither exhaustive, nor free of bias! 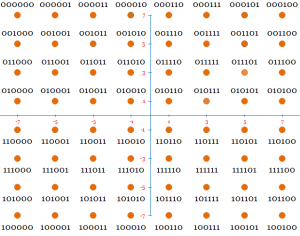 Fujitsu Optical Components did not say when it expects this 600 Gbit/s CFP2-ACO optical transceiver to become generally available; first applications will be for data center interconnect and metro network applications.  There is a consensus in the industry that the symbol rate could reach 150 Gbaud in the future, leading to further increase in the bit rate transported by a single wavelength! 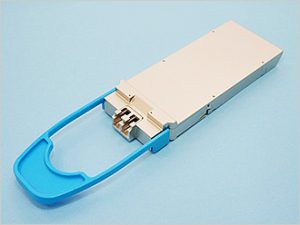 Sumitomo Electric Industries showcased at OFC its own  400 Gbit/s CFP8 transceiver, compliant with IEEE 802.3bs 400GBASE-LR8/FR8 specifications for links up to 10 km.  The SFF4801 series features SEI’s electro-absorption modulated lasers (EMLs) and PIN photodiodes and is able to support 12.8 Tbit/s on a switch faceplate and targets metro applications between data centers and clients.

New World Record for The Lowest Loss of Optical Fiber 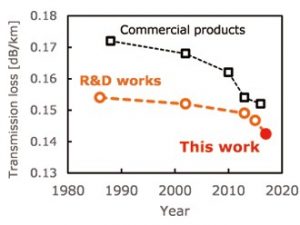 On the optical fiber front, Sumitomo Electric Industries has set a new world record for the lowest loss of optical fiber: 0.1419 dB/km at 1560 nm.  At the same time the effective area is 147 µm2.  This result was presented at the post deadline paper session at OFC 2017 conference (Paper Th5D.1).  The previous attenuation record was set by Corning (at 0.1460 dB/km) at the 2015 edition of OFC.

On 16 March 2017, Telia Carrier announced that the Telecom Infra Project (TIP) and Facebook completed a successful trial of 100G and 200G (with 16QAM modulation format) using Voyager gear (unveiled at the TIP Summit last November) and technology developed by Coriant over on its 1,089km Stockholm to Hamburg route.  Voyager is the industry´s first “white box” transponder and routing solution that will be made available to TIP members.  Following the trial, Telia Carrier is working with TIP, Facebook and Coriant towards the objective of disaggregating the hardware and software components of the network stack as part of the wider effort to make connectivity available to all.

Also on 16 March 2017, ADVA Optical Networking unveiled a new Data Center Interconnect (DCI) solution over distances shorter than 100 km.  This solution, shipped since the end of 2016, is based on a direct detection scheme and offers an alternative for internet content providers (that do not wish to deploy traditional coherent solutions, mostly for cost reasons.  This ADVA’s DCI solution is available either as an Open Line System (OLS) in a disaggregated form (for operation in a multi-vendor environment enabled by SDN controllers) or as a complete solution incorporating both the terminal and line system from ADVA.  A key feature of ADVA’s DCI solution is its SmartAmpTM line system technology offering automatic gain-provisioning and active chromatic dispersion compensation.  ADVA demonstrated on OFC 2017 floor its FSP 3000 CloudConnect™ platform with Inphi’s ColorZ™ 100Gbit/s PAM4 platform solution in QSFP form factor.  Some words about PAM4 modulation format can be found here. 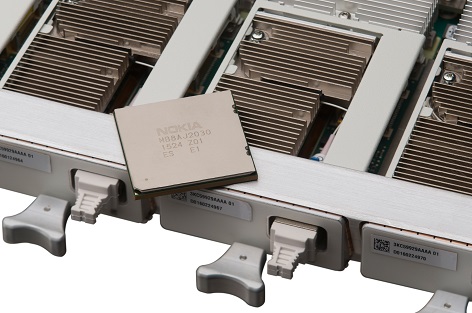 On 21 March 2017, Nokia and Facebook reported about multiple submarine field trials over a 5,500 km transatlantic submarine cable.  The first part of this trial made use of Nokia Bell Labs’ new Probabilistic Constellation Shaping (PCS) technology with shaped 64-QAM modulation format, which achieved a record spectral efficiency of 7.46 bit/s/Hz and increased the fiber capacity from 13 to 32 Tbit/s.  11,000 km round trip submarine transmission was also tested with 5.68 bit/s/Hz spectral efficiency.  As the PCS technology wouldn’t be commercialized for at least three years, the second part of the field trial was conducted using the commercially available Nokia Photonic Service Engine 2 (PSE-2) to demonstrate 200G/8-QAM and 250G/16-QAM wavelengths over a transatlantic submarine route.  200G 8-QAM wavelengths supported a spectral efficiency of 4 bit/s/Hz and a fiber capacity of 17 Tbit/s with sufficient margin to support commercial operation.  This work was presented at the post deadline paper session at OFC conference (Paper Th5B.3). 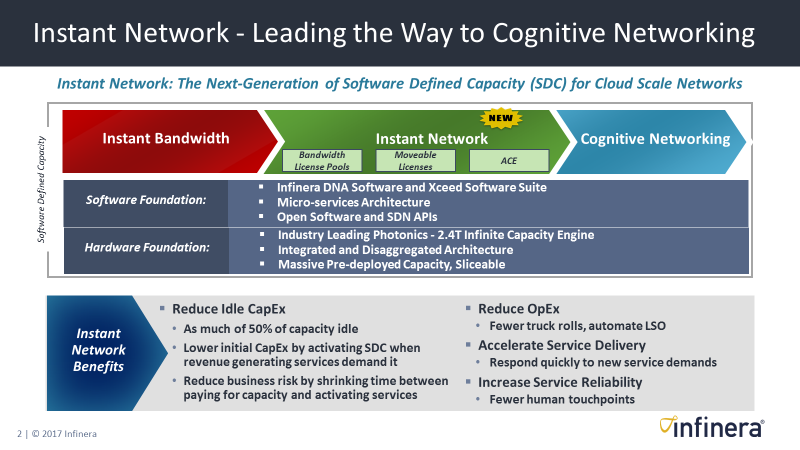 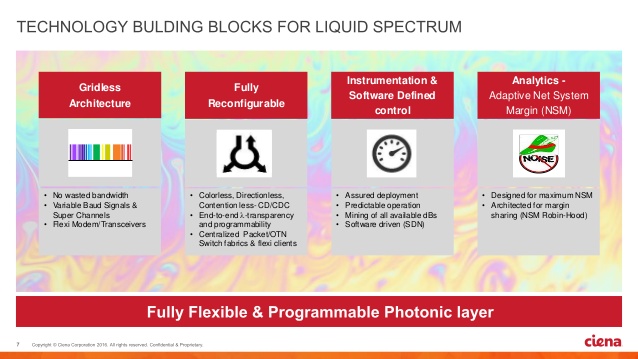 On its side, Ciena unveiled on 15 March 2017 Liquid Spectrum for software-reconfigurable optical layer.  By combining fully-instrumented flexible optics and innovative software, Liquid Spectrum can mine all available network assets and use available system margin so operators can instantly respond to new bandwidth demands and allocate capacity across any path in real time.

This pick of the latest optical transport technology news is not exhaustive but the selection clearly shows the main directions and trends followed by the optical communication community.  With a combination of flexible hardware and software, the objectives are to lower the cost per transported bit by either increasing the coherent carrier rate for long-haul applications or developing simpler and more compact solutions for shorter distances, and to make the network more flexible and responsive in response to unplanned capacity demands and network outages.