Machine-to-machine DCI traffic represents now a very predominant part of all traffic compared with the more traditional telecom traffic, driving the need for higher capacity per fiber.  We posted a tutorial providing a high-level description of various modulation formats used to address high-capacity needs.  This document covers coherent detection approach, from 50G to 400G+ channel rates, and describes an example of direct detection scheme as well.  This post is a presentation of this technical tutorial, which can be found here.

The advent at the beginning of this decade of 100G channel rate in commercial networks, associated with digital coherent detection, offered a 10-fold capacity increase compared to the previous transmission technology based on 10G waves.  100G development avoided the multiple modulation formats “mistake” of 40G as a general consensus was quickly reached by the industry around PM (or DP)-QPSK modulation format with coherent detection (PM: Polarization Multiplexing, DP: Dual Polarization, QPSK: Quadrature Phase Shift Keying).

Further increase in the channel rate can be achieved using 16-level Quadrature Amplitude Modulation (16QAM) format.  Four bits are encoded in one of the 16 symbols.  Compared to the symbol rate, this quadruples the number of bits per second to reach 100 Gbit/s.  The second step of multiplexing (multiplexing two orthogonal states of optical polarization) doubles the number of bits per second, bringing the PM-16QAM carrier rate to 200 Gbit/s.  This 200G solution is the one that has been deployed in the field since 2015, starting with terrestrial networks where high capacities are required (typically for interconnecting data centers).

The Right Coherent Modulation Format for the Right Application

In the other direction, carrier rate lower than 100G may be required for very specific applications, like upgrades of old-generation repeatered subsea cable systems where coherent 100G carriers do not work properly due to the line fiber specifications and chromatic dispersion management scheme.  For such demanding applications from an optical transport perspective, two-level Binary Phase Shift Keying (BPSK) modulation format has been implemented in conjunction with polarization multiplexing for building 50G net channel rate. 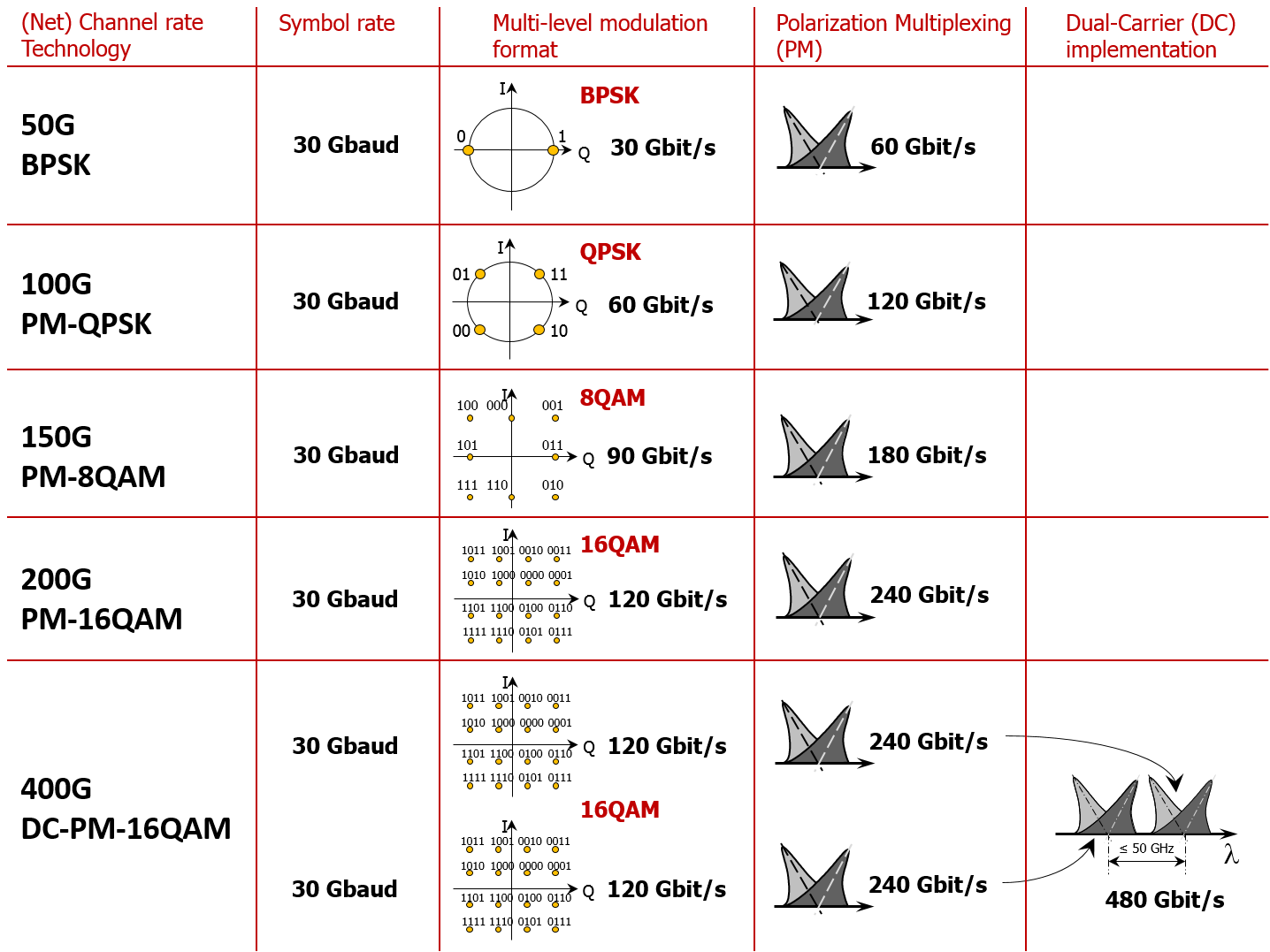 The figure above summarizes the different channel rates that can be obtained with current optoelectronics components delivering 30 giga symbols per seconds (or 30 Gbaud).  The left-hand column indicates the net rate (available for the optical layer payload) while the three right-hand columns give the gross line rate taking into account overhead (for, e.g., forward error correction).  The top row includes the three multiplexing dimensions that can be combined to get a net channel rate ranging from 50G to 400G, being understood that the wavelength multiplexing step can be extended to combine more than two 200G carriers in order to build a channel rate larger than 400G.

Multi-level modulation formats and coherent detection were introduced into optical backbone networks with the primary objectives to increase the fiber capacity and lower the cost per transported bit over fiber lengths exceeding 1,000 km.  Over transport distances shorter than 200 km, there is a gap between lower-cost optical interfaces supporting up to 10 km reach and higher-cost coherent channel cards.  Several advanced direct detection solutions, offering different channel capacities, have been examined to fill that optical reach gap, while offering cost, footprint and power consumption advantages over coherent detection approach.  Four-level Pulse Amplitude Modulation (PAM4) format is one of the direct detection options identified for achieving optical reach in the range of 100 km in a cost-effective way.  PAM4 modulation format is briefly described at the end of this tutorial about new modulation formats.