Predicting the future is not easy…  That’s why astrologers and fortune tellers tend to keep their forecasts as vague as possible so everybody can find something in agreement with what they will go through or experience. 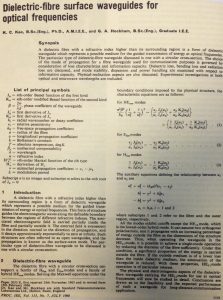 In light of recent research breakthroughs, it looks like no expert is currently putting any clear limit on the lower limit of this parameter that is key to enable ultra-high capacities over ultra-long optical reach.  This has not always been the case.  Charles Kao and George Hockham published a landmark paper in July 1966 proposing that optical fiber might be a suitable transmission medium if its linear attenuation could be kept under 20 decibels per kilometer (dB/km).  This level of attenuation was seen as the absolute maximum figure that had to be achieved before an optical fiber system could in any way compete economically with existing communication systems.  At the time of this proposal, optical fibers exhibited losses of 1,000 dB/km or more… (I.e. that one kilometer of optical fiber attenuated the light by a factor exceeding 10100!)

Stimulated by Kao and Hockham’s proposal, glass researchers began to work on the challenge of purifying glass.  Careful investigation of the attenuation showed that it was largely due to absorption in the glass, caused by impurities such as iron, copper, manganese and other transition metals which occur in the third row of the periodic table.  Hence, research was stimulated towards the development of purer glasses for use in optical fiber communications.  In 1970, Robert Maurer, Donald Keck, and Peter Schultz of Corning succeeded in developing a length of 29 meters of glass fiber exhibiting an attenuation lower than 20 dB/km – the generally accepted threshold for making fiber optics a viable transmission technology.  The 17 dB/km attenuation measured at this time deserved a “Whopee” as can be seen in the Corning lab notebook!

Several optical loss mechanisms contribute to the linear fiber attenuation.  The main ones are listed below.

Over the past decades, most of the efforts were placed on reducing the impurity level (below 1 part per billion – ppb) in the manufacturing process and macrobending/microbending losses through the manufacturing/cabling/installation processes.  As a result, the optical fiber loss has been constantly improved since the early 1980s with smaller OH– peaks and flatter spectrum in the third window.  Please note that the vertical scale of the figure below is linear while the vertical scale of the figure above was logarithmic. 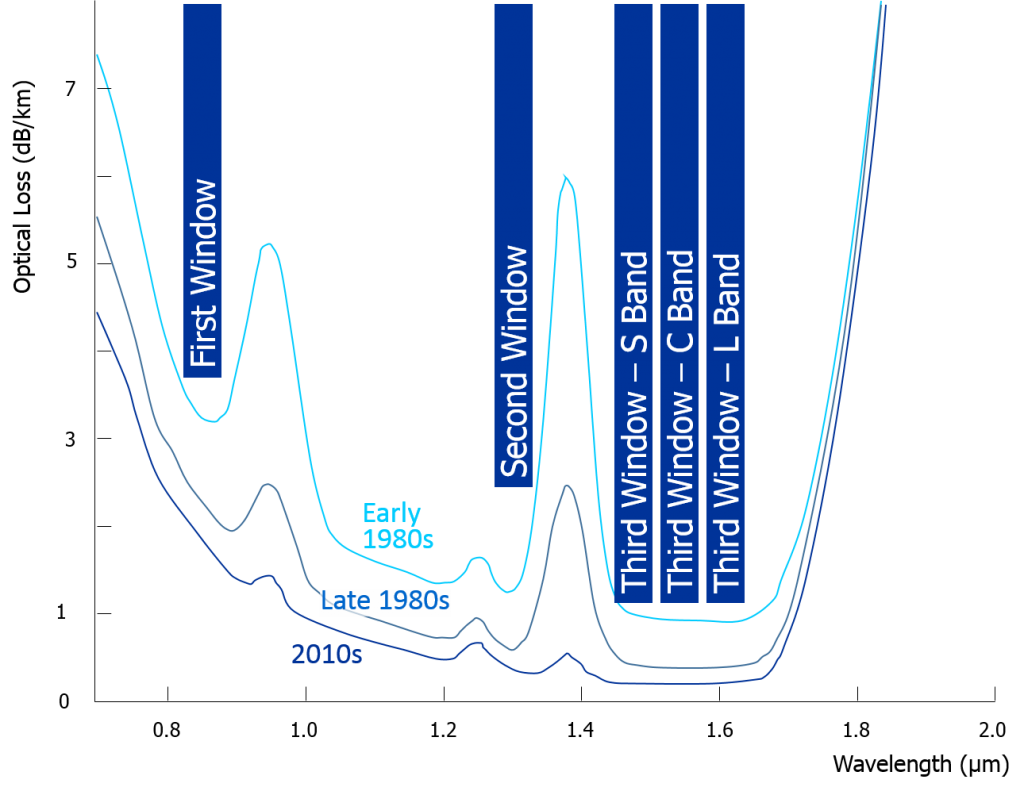 Until 2010, the lowest loss for the highest-end (and most expensive) optical fibers was above 0.16 dB/km at 1550 nm, while R&D works, mostly driven by long-haul subsea applications, demonstrated attenuation figures slightly above 0.15 dB/km.  Today, the most up-to date high-capacity subsea cable systems are built with commercial optical fibers exhibiting a loss in the range of 0.153 dB/km.

Sumitomo Electric Industries recently set a new world record for the lowest loss of optical fiber: 0.1419 dB/km at 1560 nm!  At the same time the effective area is 147 µm2; this parameter is key for enabling large launched optical power (as required for meeting output optical signal-to-noise ratio requirements) and limiting fiber nonlinearities.  This result was presented at the post deadline paper session at OFC 2017 conference (Paper Th5D.1). 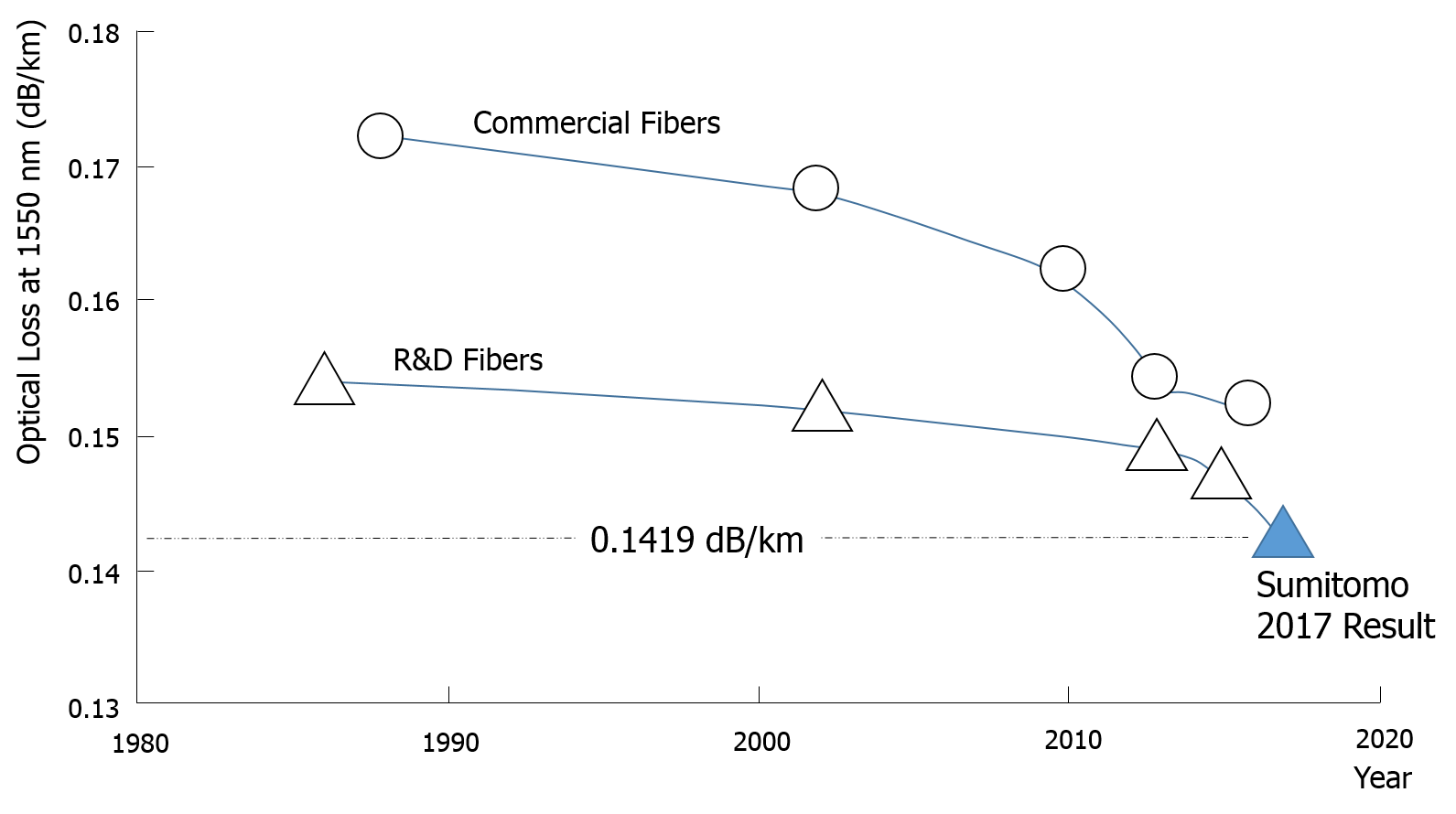 Although it is difficult to admit it, there is today no clear response about what the absolute theoretical minimum fiber loss could be.

To Conclude (About the Difficulty to Make Predictions)

Even the most successful tech prognosticators make their share of foolish predictions.  Of course, it is easy to laugh at these predictions a few decades after they were expressed.  But still here are two well-known samples of such worst tech predictions of all time.

Note: Part of this post is based on elements from “An Introduction to Fiber Optics” by Ajoy Ghatak and K. Thyagarajan (1998).