This post is the second of a series of 4 about the information rate transported by submarine cable systems.  The first post of this series presented in a simple way the Shannon limit that drives the ultimate subsea cable system capacity.  This post examines the various multiplexing options that can be put at work for increasing subsea cable system capacity and lowering the cost per transported bit as well.  The third post will look at some technologies that can be used for approaching the Shannon limit with the objective of maximizing the capacity transported by a single communication channel (in our case, a single fiber core).  Finally, the last post will review the most recent and significant results from laboratory demonstrations and field trials so one can get a good view of what will be feasible, capacity wise, in the short-and mid-terms.

The first three multiplexing dimensions (time, modulation level and wavelength) are governed by the Shannon limit as they are related to a single communication channel.  As exposed in the previous post, the multiplexing of two orthogonal States of Optical Polarization (SOPs) allows to double the capacity and spectral efficiency achievable with a single fiber pair.

The total subsea cable system capacity can be expressed in a very simple way, using all the multiplexing dimensions above:

For the sake of clarity, Number of (bidirectional) fiber cores equals the total number of fiber cores divided by 2.  Another way to express the total subsea cable system capacity is the following relationship, which involves the spectral efficiency (which is a measure of how efficiently the optical repeater bandwidth is utilized by the optical transport technologies – see our first post of this series):

Using expression (1), pentagon shapes can be used to build radar charts that display this multivariate data in 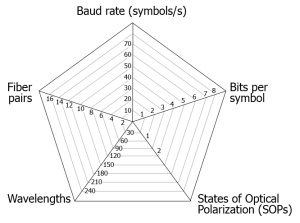 the form of a two-dimensional chart of five quantitative variables represented on axes starting from the same central point.  Practically speaking, we can play in the short- to mid-term with the baud rate (as allowed by optoelectronics and CMOS technologies), the number of bits per symbol (as allowed by Digital Signal Processing – DSP – speed), the number of carriers (as governed by the carrier spectral occupancy and the repeater bandwidth) and the number of fiber/amplifier pairs (as driven by the electrical design of the subsea cable system).

The two figures below show how the total capacity transported by subsea cable systems has been, and will be, increased over time.  The area of the blue shapes gives only a rough idea of this capacity but does not intend to be strictly proportional to it. 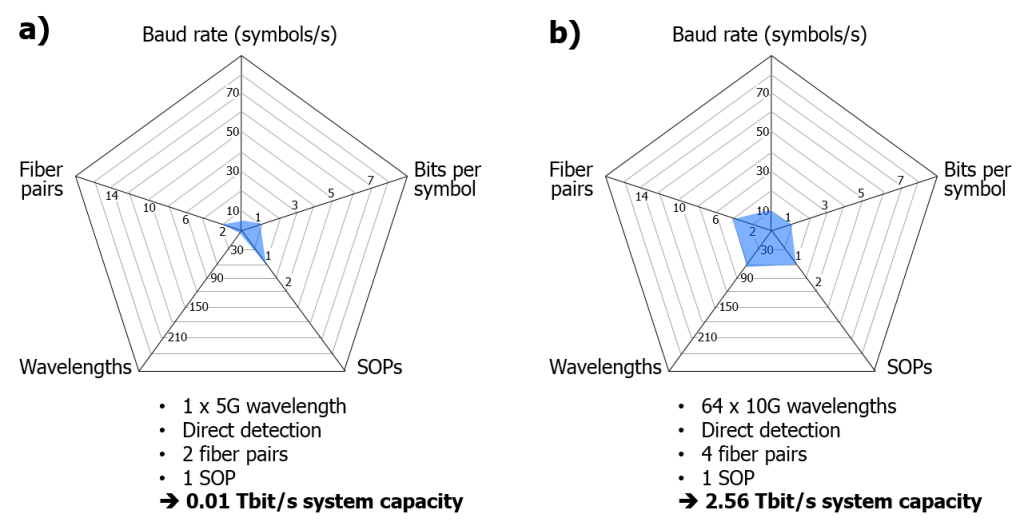 Plot a) is representative of the first optically-amplified subsea cable systems as deployed in the 90s (like TAT-12/13): they were designed for single-wavelength operation (because of the extremely narrow repeater spectrum), with a simple, binary amplitude modulation format (so 1 bit per symbol) at the rate of 5 Gbit/s; only one state of optical polarization was utilized.  Total subsea cable system capacity was then 10 Gbit/s, assuming 2 fiber pairs inside the cable.

Plot b) depicts subsea cable systems typically designed between 2000 and 2005.  These systems used optical repeater with wider spectrum and Wavelength Division Multiplexing (WDM) technology enabling to combine and launch multiple wavelengths (also named carriers or channels) into the same fiber core.  In Plot b), 64 wavelengths are multiplexed together, while the bit rate supported by one single wavelength was increased from 5 to 10 Gbit/s.  Including 4 fiber pairs, such subsea cable systems offered a total capacity of 2.56 Tbit/s. 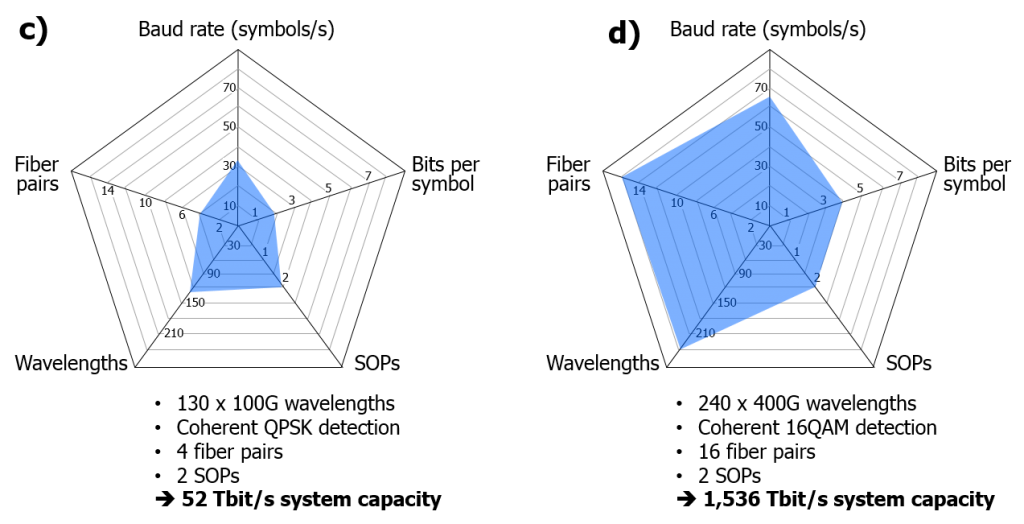 Plot c) shows the technologies put at play with the first coherent systems, as introduced around 2013 for subsea applications.  The channel rate was increased up to 100 Gbit/s using faster optoelectronics components (operating at 32 Gbaud) and multi-level modulation format (QPSK in this example, with 2 bits per symbol).  Due to pre-propagation signal processing and spectral shaping, up to 130 wavelengths can be packed within the Conventional (C) band of EDFA-based repeaters, spanning from about 1530 to 1565 nm.  Also, coherent modulation/detection technology introduced the optical polarization multiplexing where the light beam from the laser transmitter is split into two orthogonal States of Optical Polarization (SOPs), each of them being modulated by an independent data stream.  Assuming subsea cable systems designed with 4 fiber pairs, total subsea cable system capacity is 52 Tbit/s.

The next post will examine the conditions to approach the Shannon limit inside a single communication channel (i.e. single fiber core in our case) and the practical options that are available to optical network designers for getting closer to the Shannon limit.