Reviewing the public cost data for the subsea cable systems announced and/or deployed in the past 10 years easily makes obvious a striking fact: the difference in the linear subsea cable system cost, expressed in $k per km, can be as large as 6 across cable systems!  Of course multiple factors explain cost differences.  Number of fiber/amplifier pairs, fiber quality, repeater performance, installed capacity, land cable and terrestrial equipment if any between the beach manhole and the site where dry submarine equipment is installed, distances between cable manufacturing plant and area where the subsea cable system is to be deployed, challenging nature of route desktop study and survey depending on the preliminary route and seabed conditions: all these factors play important roles in the final subsea cable system cost.

There are, however, two very significant impacting factors not mentioned above: type of subsea cable and method of cable installation (on or under the seabed).  It is difficult to provide absolute cost percentage figure (each subsea cable system is somehow unique) but both factors are the two components that most significantly drive the linear subsea cable system cost.

As illustrated in our subsea cable system tutorial, submarine cables are offered in several variants (typically 5, up to 7) for various degrees of physical strength and protection.  The most “popular” (i.e. most often used) variants are LightWeight (LW), Single-Armored (SA), and Double-Armored (DA) variants.  The outer diameters typically range from 17 to about 60 mm and the design loads range from 55 kN (LW) to 300 kN (DA).

One of the primary objectives of subsea cables is to protect the fibers from the external world, namely water and physical aggressions.  Starting from the beach manhole Double-Armored (DA) cable can be required in the case the cable route comes across regions where the cable cannot be buried (e.g. rocky outcrops, pipeline crossing, etc.).  In shallow waters where the subsea cable must be buried for protection against fishing equipment or anchoring, Single-Armored (SA) cable is used.  1,500-meter water depth is in general the typical water depth at which fishing activities are conducted; this is when LightWeight (LW) typically starts to be used, i.e. for water depths higher than 1,500 meters.  For a simple seabed profile including a portion continuously deeper than 2,000 meters, the cable type sequence from beach manhole A to beach manhole B can be DA, followed by SA, LW, SA and DA.

The relative amount of DA or SA cable type significantly impacts upon the linear cost of the global subsea cable system as DA and SA cable prices are typically 3 and 2 times larger than LW cable price, respectively.

Subsea cable and submersible equipment (i.e. repeaters and branching units) are either laid on the seabed surface or buried below the seabed.  The type of installation (surface lay or burial) depends on the risks of external physical aggressions (e.g. cable cuts by anchoring or fishing activities) encountered by the subsea cable.

Surface laying consists simply as the name implies of placing the submarine cable and the submersible equipment on the seabed surface.  This cable installation technology is used for water depth typically larger than 1,000-2,000 meters. 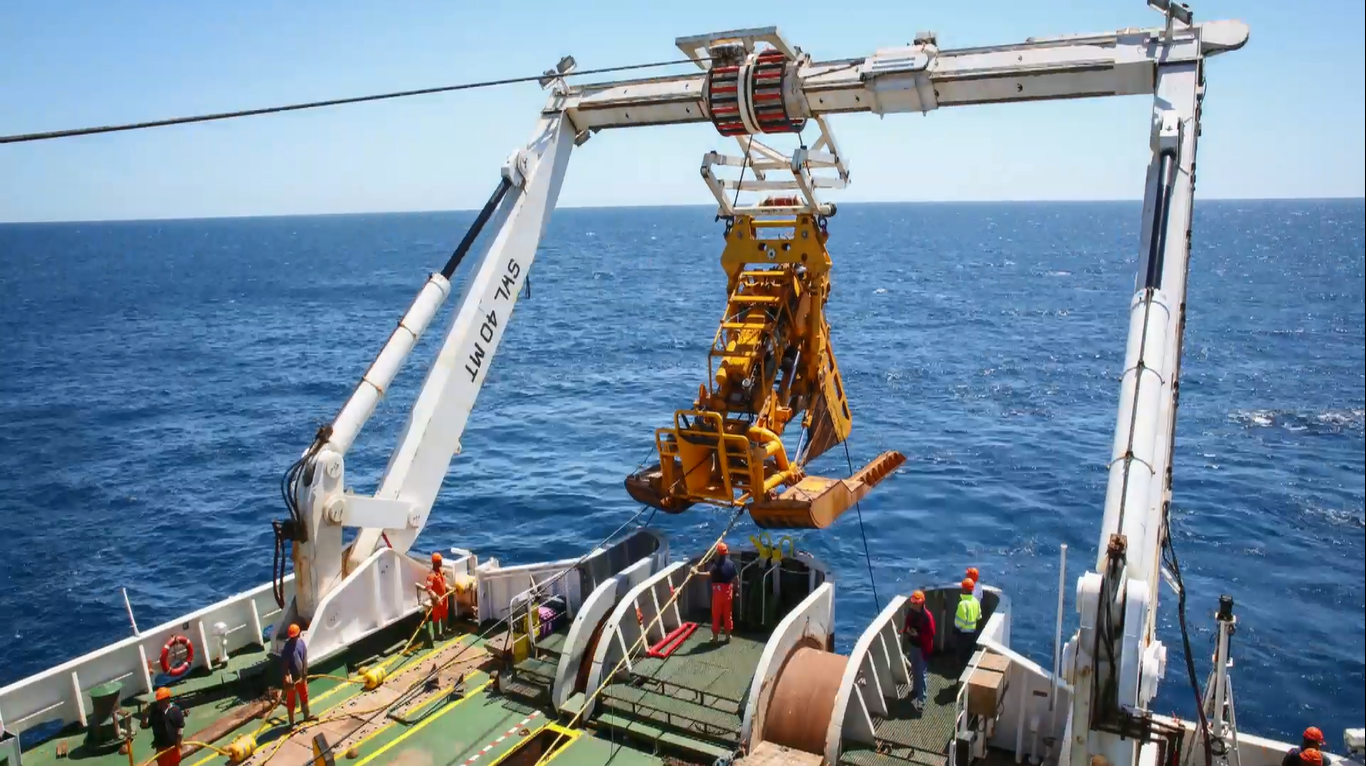 While the surface laying speed is in the range of 5 knots, the cable ship has to sail with a speed of about 0.5 knot when she tows the plow for burying the subsea cable.  The daily cost for cable ship is almost independent on the tasks achieved.  This means that, for a given subsea cable length, burial is about 10 times more expensive than surface laying.

Consider an area made of only shallow waters (e.g. the Baltic Sea) and another region where most of the route is at water depths larger than 2,000 meters (e.g. the North pacific Ocean).  The first example uses only DA and/or SA cables (no LW cable) and most, if not all, of the route is buried or protected with articulated pipe.  This involves a long utilization period of the cable ship.  The second example mostly involves LW cable, plus relatively short portions of DA and SA cable for shore ends and shallow waters.  We find here the two main components (cable and installation types) that drive the linear system cost and explain the huge differences that can be observed among subsea cable systems across the globe.