Higher-capacity, larger and more agile networks are needed to stay ahead of the current and oncoming tides of cloud-based services, Virtual Reality (VR), streaming video, gaming and other bandwidth intensive applications.  Furthermore, the optical community is working for developing open, disaggregated (in both horizontal and vertical directions), programmable and scalable ways to deploy network capacity efficiently between hyper-scale data centers within dynamic environments.  All these requirements lead to multiple, continuous technical developments and breakthroughs, with many of them unveiled just before or at the latest edition of OFC conference (11-15 March 2018 in Los Angeles).

OFC 2018, which was held this week in San Diego, California, attracted more than 15,500 attendees, 700+ exhibitors from 65 countries, and over 850 peer-reviewed papers in technical sessions (regular and postdeadline).  Last year, OFC 2017 recorded 14,500 attendees and 663 exhibitors in Los Angeles.  The organizers said OFC has been on a steep growth trajectory over the last three years, increasing in overall square footage by 44% and experiencing a 21% growth in exhibitors and attendees.

This post includes a selection of the latest optical transport technology news relevant to long-haul, high-capacity applications.  Please note that the pick is neither exhaustive, nor free of bias!

Increasing the symbol rate to 64 Gbaud and using higher order modulation, such as 16QAM to 64 QAM, lead to optical signals more sensitive to both amplitude and phase noise since the separation between states is necessarily reduced.  This situation therefore requires the ultra-stable, ultra-narrow linewidth laser sources, achieved in the case of NeoPhotonics using an external cavity approach, which results in extremely low frequency phase noise performance.

Note: How do 64 Gbaud symbol rate, 64QAM modulation format and 600G bit rate relate to each other? 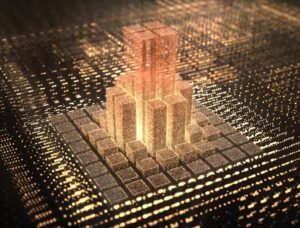 On 5 March 2018 Nokia unveiled its Photonic Service Engine 3 (PSE-3) chipset featuring Probabilistic Constellation Shaping (PCS) that pushes fiber-optic performance close to the Shannon limit to fully exploit fiber capacity.  In short, probabilistic constellation shaping is employed to limit the occurrence of high-power symbols (outermost constellation points), so that fiber nonlinearities are reduced, and the optical signal-to-noise ratio is increased for all other symbols (innermost constellation points).  More information about this technology can be found here.

The PSE-3 chipset, claimed by Nokia to be the first coherent digital signal processor to implement PCS, provides finely adjustable wavelength capacity from 100G to 600G with a single, uniform modulation format, baud rate, and channel size.  The capacity adjustment variable is the shaping of the symbols probability distribution on a set of equidistant constellation points.

This capacity tuning goes beyond the limited flexibility of the 100G/200G networks that are prevalent today with today’s coherent technology.  In addition to that, uniform baud rate results into uniform channel size, whatever the channel capacity: this greatly simplifies network planning, engineering and operations, and maximizes fiber capacity utilization as well.

This fine capacity tuning enables to extract the maximal fiber capacity over various optical route distances and optical fiber types, while probabilistic shaping reduces the gap to the fiber capacity Shannon limit due to the two-dimension Gaussian probability mass function for both the in-phase and quadrature components of the constellation symbols.

On 7 March 2018, Coriant introduced a new coherent multiservice unit for its Groove G30 platform.  The new 1.2 Tbit/s modular unit is said to leverage advances in integrated photonics and the latest 16nm coherent DSP, and to offer the following performance:

Infinera unveiled on 12 March 2018 its ICE5 Infinite Capacity Engine for powering its next generation of optical transmission systems.  ICE5 integrates Infinera’s fifth-generation photonic integrated circuit with a FlexCoherent Digital Signal Processor (DSP) and fine-grain software control to deliver 100 to 600G wavelength in the industry’s first 2.4 Tb/s optical engine.  ICE5 is said to be designed for over 40T on a single fiber within a fraction of a data center rack, increasing capacity up to 65 percent over currently deployed networks while reducing power per transported Gbit/s by 60 percent.  It is interesting to note that 6 days before, Nokia claimed that its new PS3-E coherent engine “increased capacity up to 65% over currently deployed networks while reducing power by 60%”.

Infinera Intelligent Transport Network platforms with ICE5 are planned for availability in early 2019.

Up to 600G Bandwidth-Variable Transponders

The new 1FINITY transponders will support both C-band and L-band transmission, allowing full fiber capacity utilization up to 76.8T per fiber pair.  Commercial production is expected in the second half of 2018.

Previous Announcements from Other Coherent Suppliers 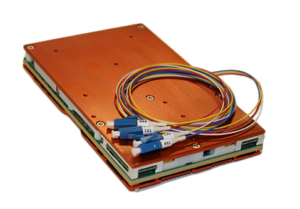 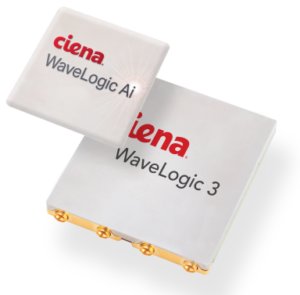 Unlike last year, no breakthrough announcements were at OFC 2018 about further decrease in optical fiber attenuation or demonstrations of higher capacities for long-haul subsea cable systems.  Our September 2017 post (Maximizing Subsea Cable System Capacity: Recent Lab Demos and Field Trials) remains a good source of information for getting a quick understanding of where the industry is at with high-capacity subsea transport over long distances.  Focusing on transmission equipment connected at the ends of subsea cable systems, the clear trends are increase in the channel capacity and the in the number of operational modes that are made available to operators (selectable baud rate, selectable modulation format, selectable FEC overhead, tunable capacity).  With some commercial transmission equipment, the number of operational modes can range from 20 to 30!  This flexibility enables to reduce the gap to the Shannon limit and to maximize the fiber capacity, whatever the length of the optical route.