IP transit is one of the key pieces that make up the Internet.  Without IP transit, the Internet as we know it today would not work: we would have a bunch of closed networks (some kind of isolated islands) that do not connect with each other and traffic would not make it to end users.  The Internet is made up of a collection of networks: in order to get traffic from one end user to another one, all service and hosting providers’ networks need to have an interconnection mechanism.  IP transit is one way to achieve this interconnection.

No single network in the market connects directly to all the other networks on the Internet.  The transit provider is here to allow multiple networks to exchange traffic with one another.  Transit providers’ routers (routers A and B in the Figure below) let other networks carry traffic to the network that has bought the transit and get a fee (the IP transit fee) for that service. 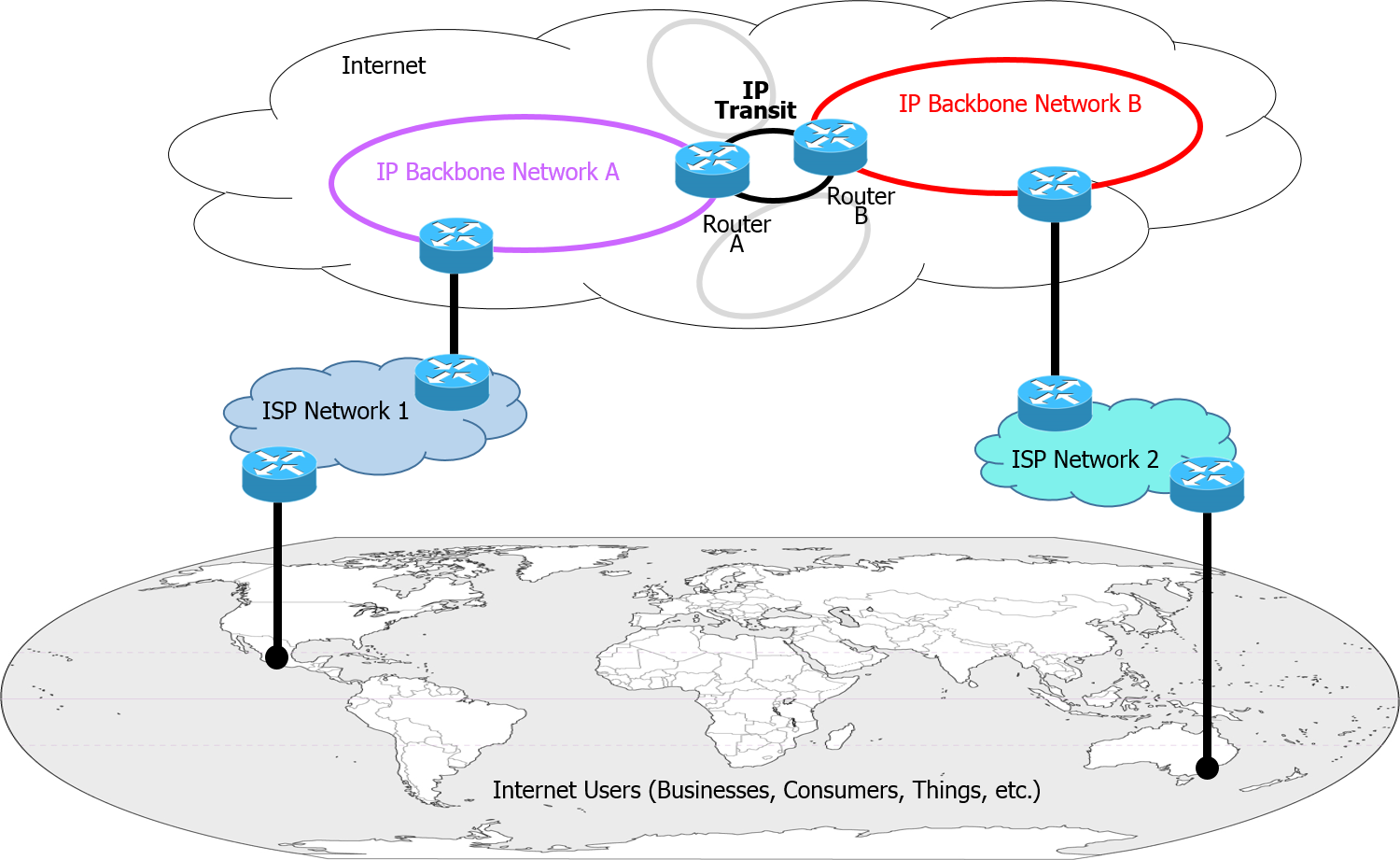 IP transit contracts vary greatly across the world, in type, size, price, performance and service level agreement.  In the example above, the transit can happen at any place between Mexico and Sydney, e.g. in New York, London or Singapore.  Key factors that drive transit location are price and availability of rich connectivity.

As tracked by TeleGeography’s IP Transit Pricing Service, IP transit service prices continue to decline throughout the world.  Although representing a global revenue of $5 billion in 2015, the global IP transit revenues are planned to suffer from significant erosion in the midterm, down to about $3 billion in 2020. 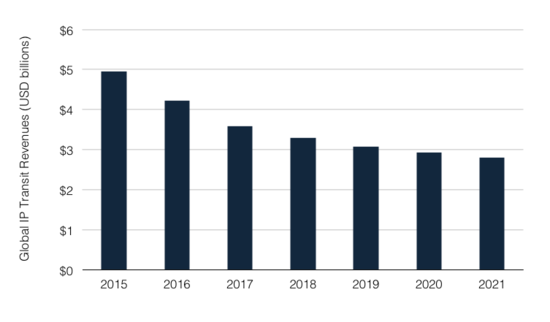 This price erosion is, however, not global worldwide.  As highlighted by TeleGeography, prices have fallen much slower and IP transit is quite more expensive in regions that remain largely dependent on long-haul links to Europe or the USA to gain access to international connectivity.  In such regions, IP transit service providers incur the cost of transport and price local transit accordingly, yielding much higher prices than in hub markets.  This transport/transit cost structure can lead some users to achieve IP transit not locally but remotely (via, e.g., the use of subsea cable systems) in locations where IP transit cost is very low. 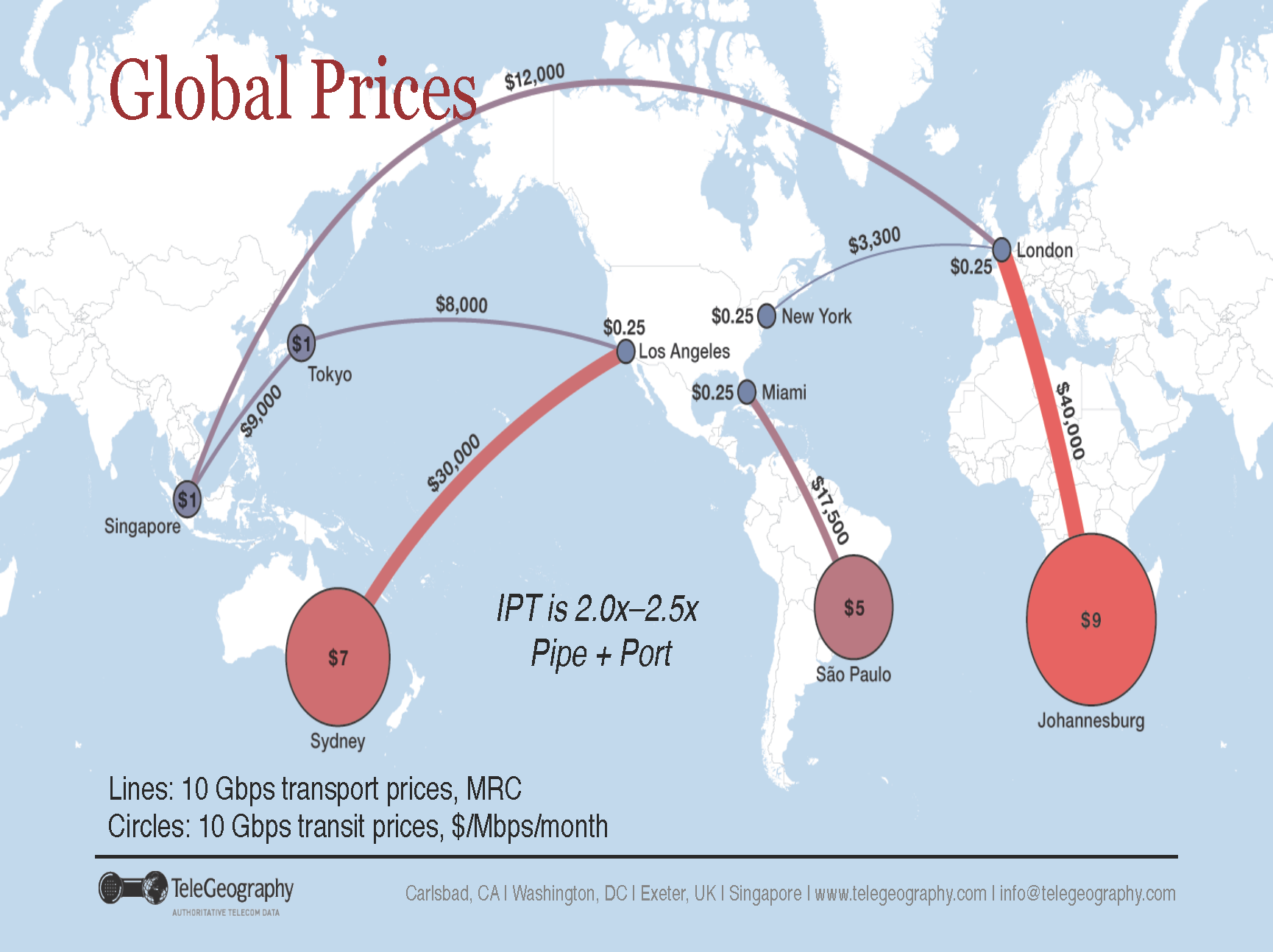 The diameter of the cities is related to the local IP transit cost, while the thickness of the lines connecting cities is related to the subsea transport cost.  Let’s take the very simplified example of network interconnection in Johannesburg where the IP transit is priced at 9 $/(Mbit/s)/month on average between Network A and Network B as illustrated in the Figure below.

If connectivity with Network B is offered in London as well, it is more cost-effective to achieve the IP transit between Network A and Network B in London rather than in Johannesburg: the transport cost is offset by the (huge) difference in IP transit cost.  This is obvious if a 10G traffic is assumed:

Many factors can impact the decision about the location where IP transit should happen: as we just saw it, cost is one reason but international connectivity richness or latency issues may be additional ones.  What is true today is that most Internet traffic in São Paulo is ultimately exchanged remotely in Miami, and that a significant amount of Internet traffic in Sydney is exchanged in Los Angeles.

Both IP transit and transport prices decrease every year but it looks like transport prices tend to drop at a lower rate.  Furthermore, additional subsea cable systems along new routes are being built for more diverse long-haul connectivity across the world.  Both factors may reduce the predominance of some today’s hubs and favor IP transits at the regional levels.